How To Design A Reliable Distributed Timer

I have been maintained a legacy distributed timer for months for my employer, then some important pay business are leveraging on it, with 1 billion tasks handled every day and 20k tasks added per second at most. Even though it's old and full of black magic code, but it also also have insighted and well-designed code. Based on this old, running timer, I summarize and extract as this article, and it wont include any running code(perhaps pseudocode, and a lot of figures, as an adage says: A picture is worth a thousand words), if you are curious about the reason(I personally suggest to watch the TV series Silicon Valley, Richard has gave us a good example and answer)

There are several algorithms in the world to implement timer, such as Red-Black Tree, Min-Heap and timer wheel. The most efficient and used algorithm is timer wheel algorithm, and it's the algorithm we focus on.

As for timing wheel based timer, it can be modelled as two internal operations: per-tick bookkeeping and expiry processing.

After introducing timing wheel algorithm, let's go back to the topic about designing a reliable distributed timer, it's essential to decide how to store timer task. Taking implementation complexity and time, space trade off, we choose the Hashed Timing Wheel algorithm.

There are several internal components developed by my employer, one of them is named TableKV, a high-availability(99.999% ~ 99.9999%) NoSql service. TableKV supports 10m buckets(the terminology is table) at most, every table comes with full ACID properties of transactions support. You could simply replace TableKV with Redis as it provides the similar bucket functionality.

As we mentioned before, when the clock tick-tacks to currenttime, we fetch all expiry tasks. When our service is running on a distributed system, it's universal that we will have multiple hosts(physical machines or dockers), with multiple current_times on its machine. There is no guarantee that all clocks of multiple hosts synchronized by the same Network Time Server, then all clocks might be subtly different. Which currenttime is correct? 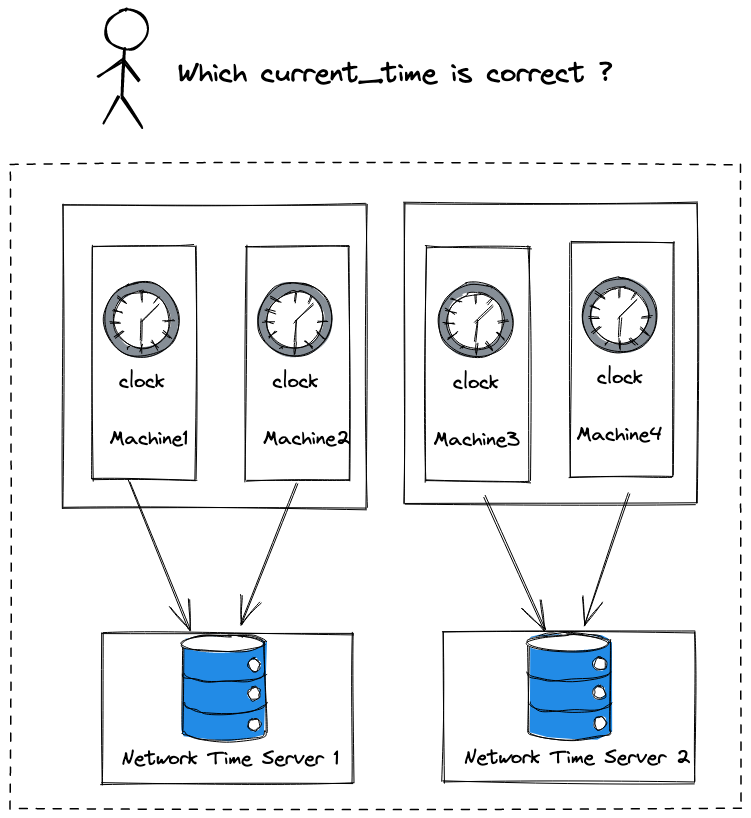 In order to get the correct time, it's necessary to maintain a monotonic global clock(Of course, it's not the only way to go, there are several ways to handle time and order). Since everything we care about clock is Unix timestamp, we could maintain a global system clock represented by Unix timestamp. All machines request the global clock every second to get the current time, fetching the expiry tasks later.

Well, are we done? Not yet, a new issue breaks into our design: if all machines can fetch the expiry tasks, these tasks will be processed more than one time, which will cause essential problems. We also need a mutex lock to guarantee only one machine can fetch the expiry task. You can implement both global clock and mutex lock by a magnificent strategy: an Optimistic lock 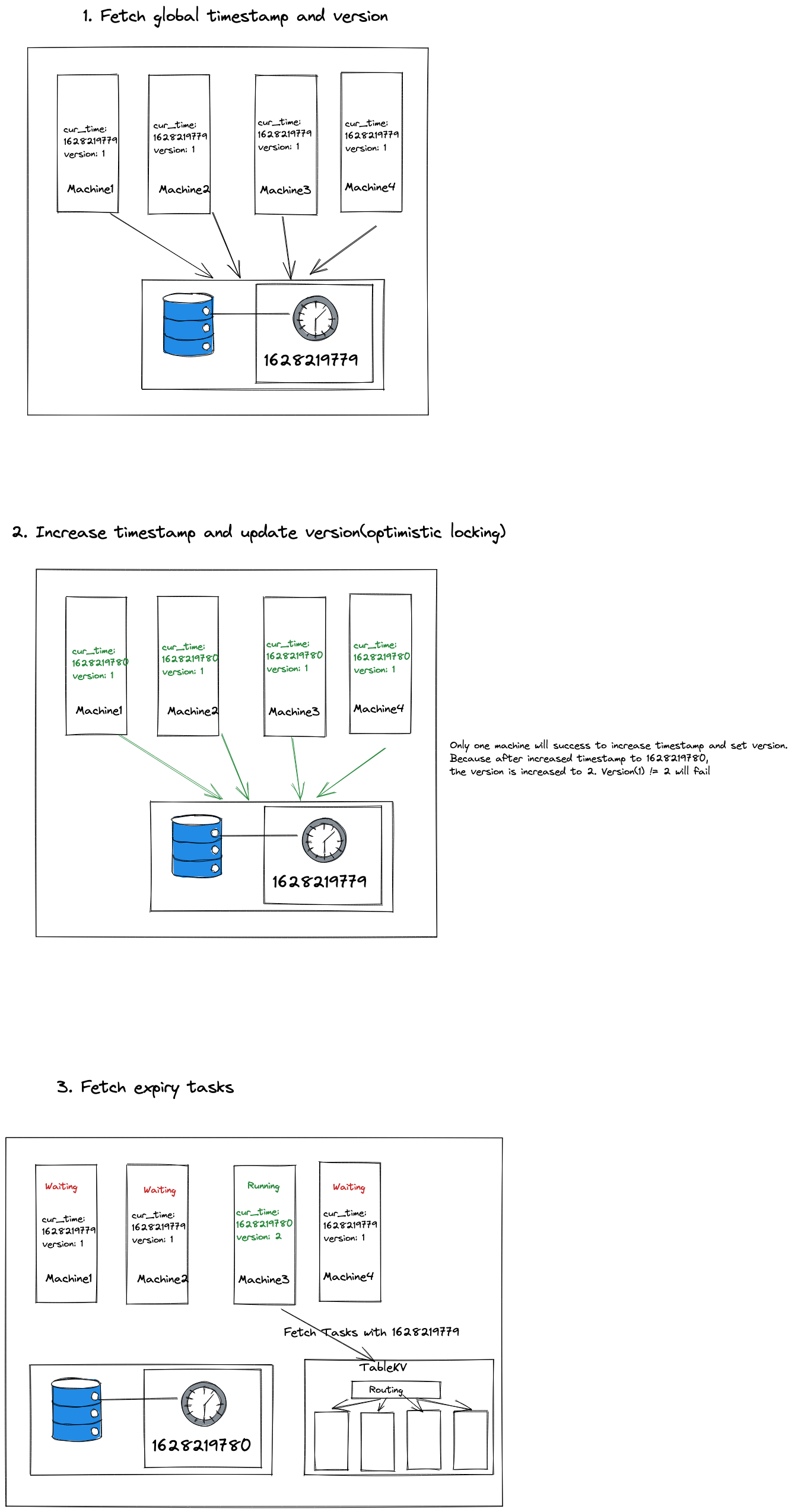 We could encapsulate the role who keep acquiring lock and fetch expiry data as an individual component named scheduler.

Expiry processing is responsible for invoked the user-supplied callback or other user requested action. In distributed computing, it's common to execute a procedure by RPC(Remote Procedure Call). In our case, A RPC request is executed when timer task is expiry, from timer service to callback service. Thus, the caller(user) needs to explicitly tell the timer, which service should I execute with what kind of parameters data while the timer task is triggered.

We could pack and serialize this meta information and parameters data into binary data, and send it to the timer. When pulling data out from slot, the timer could reconstruct Request/Response/Client type and set it with user-defined data, the next step is a piece of cake, just executing it without saying.

Perhaps there are many expiry tasks needed to triggered, in order to handle as many tasks as possible, you could create a thread pool, process pool, coroutine pool to execute RPC concurrently.

Supposing the callback service needs tons of operation, it takes a hundred of millisecond. Even though you have created a thread/process/coroutine pool to handle the timer task, it will inevitably hang, resulting in the decrease of throughout.

As for this heavyweight processing case, Message Queue is a great answer. Message queues can significantly simplify coding of decoupled services, while improving performance, reliability and scalability. It's common to combine message queues with Pub/Sub messaging design pattern, timer could publish task data as message, and timer subscribes the same topic of message, using message queue as a buffer. Then in subscriber, the RPC client executes to request for callback service.

After introducing message queue, we could outline the state machine of timer task: 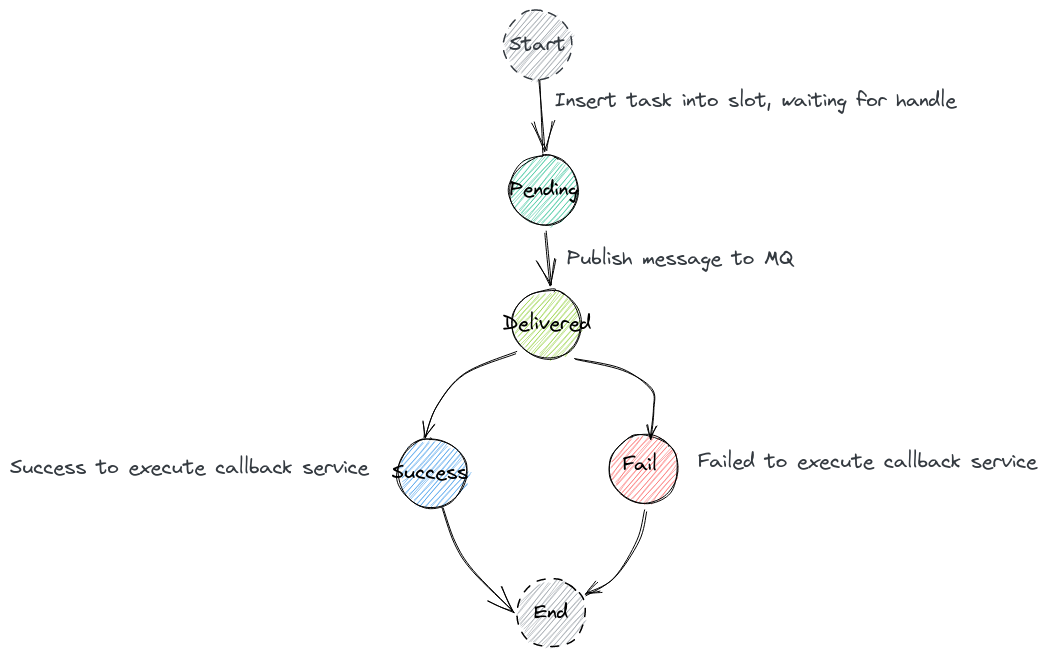 Thanks to message queue, we are able to buffer, to retry or to batch work, and to smooth spiky workloads

After a long way, we are finally here. The final full architecture would look like this:

Wish you have fun and profit